From WikiPoetry, the free poetry project
Jump to navigation Jump to search

Nizar Tawfiq Qabbani (Template:Lang-ar, Template:ALA-LC, Template:Lang-fr; 21 March 1923 – 30 April 1998) was a Syrian diplomat, poet, writer and publisher. His poetic style combines simplicity and elegance in exploring themes of love, eroticism, feminism, religion, and Arab nationalism. Qabbani is one of the most revered contemporary poets in the Arab world,[1][2] and is considered to be Syria's National Poet.[3]

Qabbani as a youth.

Nizar Qabbani was born in the Syrian capital of Damascus to a middle class merchant family. His mother, Faiza Akbik, is of Turkish descent. Qabbani was raised in Mi'thnah Al-Shahm, one of the neighborhoods of Old Damascus and studied at the National Scientific College School in Damascus between 1930 and 1941.[4] The school was owned and run by his father's friend, Ahmad Munif al-Aidi. He later studied law at Damascus University, which was called Syrian University until 1958. He graduated with a bachelor's degree in law in 1945.[4]

While a student in college he wrote his first collection of poems entitled The Brunette Told Me, which he published in 1942.[5] It was a collection of romantic verses that made several startling references to a woman's body, sending shock waves throughout the conservative society in Damascus.[4] To make it more acceptable, Qabbani showed it to Munir al-Ajlani, the minister of education who was also a friend of his father and a leading nationalist leader in Syria. Ajlani liked the poems and endorsed them by writing the preface for Nizar's first book.

After graduating from law school, Qabbani worked for the Syrian Foreign Ministry, serving as Consul or cultural attaché in several capital cities, including Beirut, Cairo, Istanbul, Madrid, and London. In 1959, when the United Arab Republic was formed, Qabbani was appointed Vice-Secretary of the UAR for its embassies in China. He wrote extensively during these years and his poems from China were some of his finest. He continued to work in diplomacy until he tendered his resignation in 1966. By that time, he had established a publishing house in Beirut, which carried his name.

When Qabbani was 15, his sister, who was 25 at the time, committed suicide because she refused to marry a man she did not love.[6] During her funeral he decided to fight the social conditions he saw as causing her death. When asked whether he was a revolutionary, the poet answered: “Love in the Arab world is like a prisoner, and I want to set (it) free. I want to free the Arab soul, sense and body with my poetry. The relationships between men and women in our society are not healthy.” He is known as one of the most feminist and progressive intellectuals of his time.[6] 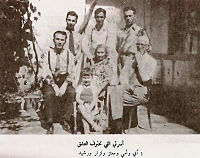 Qabbani with his family, his parents and brothers.

Qabbani had two sisters, Wisal and Haifa; he also had three brothers: Mu'taz, Rashid, and Sabah. The latter, Sabah Qabbani, was the most famous after Nizar, becoming director of Syrian radio and TV in 1960 and Syria's ambassador to the United States in the 1980s.

Nizar Qabbani's father, Tawfiq Qabbani, was Syrian while his mother was of Turkish descent. His father had a chocolate factory; he also helped support fighters resisting the French Mandate for Syria and the Lebanon and was imprisoned many times for his views, greatly affecting the upbringing of Nizar into a revolutionary in his own right. Qabbani's grandfather, Abu Khalil Qabbani, was one of the leading innovators in Arab dramatic literature.

The family name, Qabbani, is derived from Qabban (Template:Lang-ar) which means Steelyard balance.[8]

Nizar Qabbani married twice in his life. His first wife was his cousin Zahra Aqbiq; together they had a daughter, Hadba, and a son, Tawfiq. Tawfiq died due to a heart attack when he was 22 years old when he was in London. Qabbani eulogized his son in the famous poem To the Legendary Damascene, Prince Tawfiq Qabbani. Zahra Aqbiq died in 2007. His daughter Hadba,[9] born in 1947, was married twice, and lived in London until her death in April 2009.[9]

His second marriage was to an Iraqi woman named Balqis al-Rawi, a schoolteacher he met at a poetry recital in Baghdad; she was killed in the 1981 Iraqi embassy bombing in Beirut during the Lebanese Civil War on 15 December 1981.[4][6] Her death had a severe psychological effect on Qabbani; he expressed his grief in his famous poem Balqis, blaming the entire Arab world for her death. Together they had a son, Omar, and a daughter, Zainab. After the death of Balqis, Qabbani did not marry again.

After the death of Balqis, Qabbani left Beirut. He was moving between Geneva and Paris, eventually settling in London, where he spent the last 15 years of his life.[6] Qabbani continued to write poems and raise controversies and arguments. Notable controversial poems from this period in his life include When Will They Announce the Death of Arabs? and Runners.

In 1997, Nizar Qabbani suffered from poor health and briefly recovered from his sickness in late 1997.[10] A few months later, at the age of 75, Nizar Qabbani died in London on 30 April 1998 of a heart attack.[7] In his will, which he wrote in his hospital bed in London, Nizar Qabbani wrote that he wished to be buried in Damascus, which he described in his will as "the womb that taught me poetry, taught me creativity and granted me the alphabet of Jasmine."[11] Nizar Qabbani was buried in Damascus four days later in Bab al-Saghir.[11] Qabbani was mourned by Arabs all over the world, with news broadcasts highlighting his illustrious literary career.[11]

Qabbani began writing poetry when he was 16 years old; at his own expense, Qabbani published his first book of poems, entitled The Brunette Told Me Template:Lang, while he was a law student at the University of Damascus in 1944.

Over the course of a half-century, Qabbani wrote 34 other books of poetry, including:

And his verses would remain popular after his death, and put to song by Arab pop-music stars such as Kazem al-Saher and Latifa.[11] However, such songs were introduced after filtering the original poems.

Many of Qabbani's poems have also been translated into English and other foreign languages, both individually and as collections of selected works.[4] Some of these collections include:

Many of Qabbani's poems has been translated into Nepali by Suman Pokhrel, and are collected in an anthology tilled Manpareka Kehi Kavita.[16][17][18]

Many of Qabbani's poems are translated into Hindi by Siddheshwar Singh, Arpana Manoj, Manoj Patel, Rinu Talwar and other translators.[19]

Evgeniy Dyakonov wrote his PhD thesis on the translation of Nizar Qabbani's poetry into Russian; Dyakonov's translations were published by Biblos Consulting, Moscow, in 2007.[20]